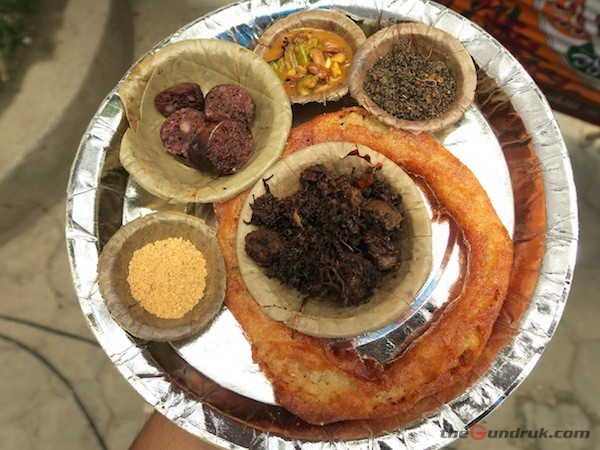 Nepali cuisine is much more diverse than you think. It is more than just daal-bhaat-tarkari. Every ethnic group and community have their own or variance in food culture, traditions and way of cooking. It often differs from Himal to Terai and from Mechi to Mahakali. Even the Newar communities living in Kathmandu and Bhaktapur have some variance in their cuisines, and similarly in Tharu communities living in eastern region and far-western region.

Rai and Limbu are one of the indigenous ethnic communities of Nepal. The communities originally are inhabitants of hilly region in eastern Nepal. Their food culture represents diversity of their cuisines with limited food resources they have or grown in hilly terrains. Millet, buckwheat, wheat, corn, rice, seasonal vegetables including wild ones, domestic pigs and poultry are the key traditional ethnic foods.

Here are some of the major food items and delicacies of Rai and Limbu ethnic communities.

Kinema is fermented soybeans, which are then dried and store. It is used to make curry, soup and achaar. It is traditionally fermented by boiling soaked soybeans, then wrapped in locally grown fresh fern fronds or banana leaves and placed in bamboo basket for fermentation. It has pungent ammoniac odor but very addictive flavor once you are used to it.

Meat from local domestic pigs (sungur) is one of the much loved and widely consumed foods, largely during the festivals and celebrations. The pork meat is simply cooked with yangben (wild edible lichen), blood and spices such as onion, ginger, garlic, cumin seed and coriander seed. Yangben are collected from old trees in the jungle. These are then processed by cooking in water with firewood ashes for several hours, thoroughly washed with ample of water and dried.

Selroti is a typical food prepared during special occasions and festivals in many ethnic communities of Nepal. It is deep fried ring-shaped flour confection made from rice batter flavored with ghee and spices. Nowadays, millet, buckwheat and maize flour are also added to rice flour to make it more nutritious. It is eaten with vegetable or meat curry, achaar or simply with tea.

Wachipa is a special dish made by cooking rice, minced local chicken meat along with burnt downy feather follicles and offal. It has unique bitter taste and aroma that you get in from firewood roasted meat.

Sargemba is basically a blood sausage prepared from pig blood, yangben, rice and spices, and incased in pig intestines. It is one of rare delicacies prepared during the major festivals. Almost all parts and organs of pig are consumed by making various delicacies.

It is dry ground form of achaar made from oily seeds such as niger seed (Philinge), pumpkin seed, sesame seed etc., salt, spices powder and sour agents such as lime juice. Once prepared, it can be stored for weeks to months. So, it is easy alternative to fresh pickle and very nutritious.

As in many other ethnic communities, gundruk made from fermenting spinach especially and then dried is also a popular and everyday food items. It is generally made into achaar by adding green herbs, spices, and oils. It is also made into soup as an alternative to daal or lentil soup.

Steamed rice and Dhido (prepared by cooking millet or buckwheat flour in boiling water) are the main staple dish, which are generally eaten for both lunch and dinner with vegetable curry, meat curry, daal or soup and achaar.

Tongba is alcoholic beverage prepared by fermenting millet, and consumed with pouring hot water over fermented grains. The name is derived from the special cylindrical vessel in which the alcoholic beverage is served. Raksi is hard distilled version generally made from fermented millet. These beverages are served to guests as a gesture of respect, and also must-have drinks in occasions and festivals.