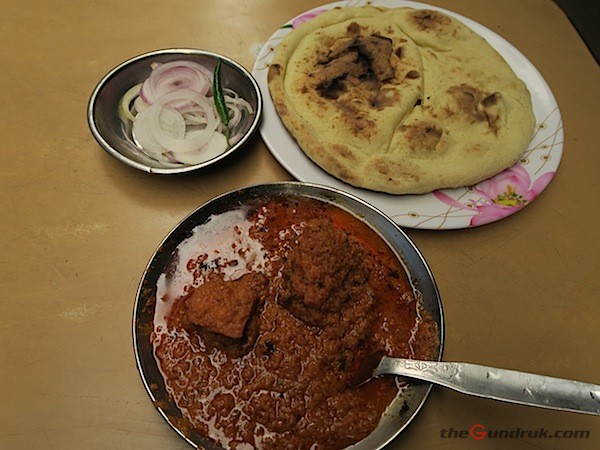 The entry of Muslim in Kathmandu Valley is dated back to 15th century during the Malla era. The Muslim in Kathmandu Valley is said to come from three regions: Kashmir, North India and Tibet, on different time period. Migrated Muslims have assimilated themselves in Newari culture and lived in harmony with Newar communities. The harmony is also reflected in the action of Malla kings- allowed and granted land to build Kashmiri Takia shrine and Jame Masjid in Kathmandu.

As they came in, they also brought their own food culture. I have always loved their food. When I was is school I had a close childhood Muslim friend. We used to share our tiffin and preferred their food over mine packed by my mother. The foods were spicier and had more complex flavor than we are used to.

In Kathmandu, there is small community of Newar Muslim in the Northernmost part of Thamel, which is known as Thamel Muslim Tole, and located adjacent to Ga:Hiti. There are around 11-12 houses that belong to Newar Muslims, and they speak Newari language fluently. When I visited there recently for the food, they happened to be vibrant in the evening because of Ramadan. The restaurants were selling foods to people who were fasting all day. It is a place to visit- you can buy halal food and try authentic Muslim cusisines. There are two restaurants serving Muslim cuisines: Bishmillah Restaurant (Mobile: 9721545477) and Asma Biryani Center (Mobile: 9803217416). The assimilation of their food culture to local is also reflected in the use of Buff instead of Beef. We are lucky and proud to have such a diverse food culture in our communities.