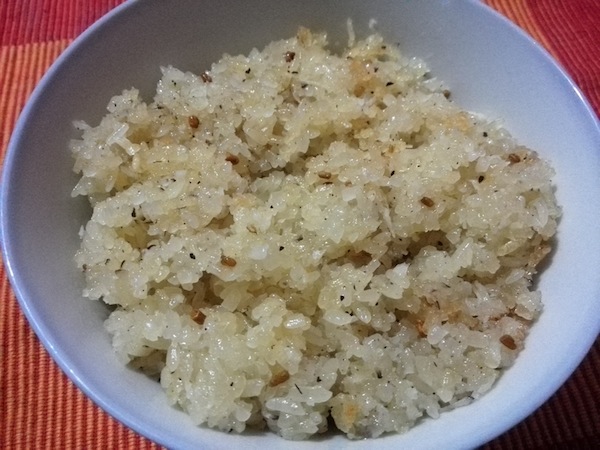 Anadi chamal (rice) is a local variety of sticky rice largely cultivated in western Nepal. In fact, it the only glutinous rice found traditionally grown in Nepal. There are two type of Anadi chamal– Rato Anadi (Red) and Seto Anadi (White). Anadi rice is used to make different varieties of cuisines in Nepal and has rich cultural value, but now almost forgotten. As new hybrid varieties are widely promoted and cultivated supposedly of their high yield, such traditional varieties have become rarer and rarer to find.

It is soft and sweet and has its own subtle aromatic flavor. It is found to have high protein content and believed to have medicinal values. The cooked rice is fed to the women who recently gave birth, and people also drink the water that comes after soaking the rice. It is used in making local cuisines such as Chichad, Latte, khatte, Siroula and Selroti.

Chichad is a delicacy of Tharu and other ethnic communities. It is prepared by steaming soaked anadi rice (with ghee) wrapped in banana leaf. Tharu community prepares it during Maghe Sakranti (1st day of Magh) or Maghi- a festival celebrated during mid-January and also a New Year.

Latte is prepared by soaking the anadi rice overnight and cooking it in ghee with frequent stirring and steaming (with the lid on) with sugar and sometimes with coconut, nuts, and cardamom. Unlike the normal process of cooking rice, no water is added during its cooking process generally. It is mainly consumed during Saune Sakranti (1st Shrawan), a festival celebrated during mid-July and Pandhra Poush (15th Poush), a festival celebrated during the end of December.

Khatte is prepared by light soaking of rice in water and then roasting, and it is consumed as snacks with tea. Siroula is prepared by soaking husked rice for a couple of day, then roasting until they popped, which is left to cool followed by de-husking using huller or paddle pounder (dhiki). It is consumed as snacks with or without milk and sugar.[1] Selroti is the most popular Nepali dish prepared by frying rice batter in ghee or oil. It is prepared during dashain, tihar, other festival and occasions such as marriage ceremony, bratabandha, Shraaddha etc.

Mom used to make us Latte more often when we were kids. Here is the recipe of Latte, cooked in ghee and grated coconut. Fenugreek seeds provide a unique aromatic flavor to the dish.

Soak the anadi rice overnight. Drain the rice. (You can drink that water. It is regarded to have medicinal values.)

Stir the rice gently making sure that every grain is coated with ghee. Put the lid for a minute and then stir again. Cook the rice with frequent stirring and steaming with the lid on for around 15-20 mins. Add one or two tablespoons of sugar according to your taste in between while cooking. Traditionally people use sugarcane molasses (khudo) or jaggery in the southern plains. I have also added some grated coconut in between as recommended by my mom. It gives a nutty flavor to the dish. (Note: Make sure that the rice doesn’t stick to the bottom and burnt during the process.)

Turn off the heat once the rice is fully cooked. You can use a few tablespoons of hot water if you find that the rice is not cooked thoroughly. But the trick of cooking good Latte traditionally is by letting the rice cook its own moisture that is retained during soaking. The other trick is frequent stirring, and steaming process with the lid on.

You can serve the rice with vegetarian or non-vegetarian curry and pickle/achaar.