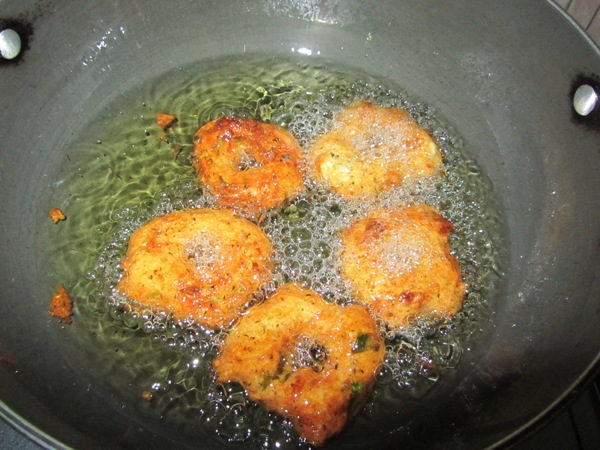 One doesn’t have to wait for Maghe Sankranti or Maghi to eat batuk. Here’s how you can make the easy and nutritious dish.

This article was originally published in The Kathmandu Post, 28 August 2020

On Maghe Sankranti eve, my mother would make batuk, a ring-shaped deep-fried black lentil fritter, and also boil a variety of tubers such as yam, taro, and sweet potato. We would eat them the following day. People believe that consuming food cooked on Maghe Sankranti day itself is inauspicious.

Batuk is a traditional festive delicacy of both the Magar and Khas communities, more celebrated by Magars. They prepare batuk on Maghi, a New Year festival celebrated on the same day of Maghe Sankranti. Magars also eat batuk during weddings, where the groom’s family presents batuk to the bride’s family along with pig meat, alcohol, and selroti. Newas have their own version of batuks, which are called bara. Tharus in the west also make black lentil fritters known as bariya but it is flat or ball-shaped.

In many parts of the world, lentils or bean paste is used to make all kinds of fritters or balls. In the Middle East, falafels are made from chickpeas or fava beans. In West Africa and Brazil, black eyed peas are used to make akara or acaraje. In some South Asian countries, like India, Bangladesh, and Srilanka, a distant cousin of the batuk is the vada or vadai, which is made from lentils.

Batuk is usually made from black lentils (maas ko dal) or sometimes from rice beans (masyang). Black lentil (scientific name: Vigna mungo; Hindi: urad; Nepali: maas) is one of the Indian subcontinent’s most ancient crops and is even mentioned in ancient Vedic scripture including Atharvaveda dating back to 1000–900 BCE as masa. The name masa, from which its Nepali name is derived, is considered an ancient Dravidian language—still spoken in Southern India—and was adopted to Sanskrit language.

The lentil holds special sanctity in Hindu rituals, but isn’t generally offered to higher deities, as it is associated with darkness and death. In Nepal, Khas people make furaula, a round ball-shaped black-lentil fritter, during sraddha, an annual remembrance for deceased parents or ancestors. Fulaura differs from batuk by its shape.

Black lentil is also considered an energy food, cooked into special delicacies like batuk and khichadi (rice and black lentil cooked together) and eaten together with other energy foods such as ghee, jaggery taffy, and a variety of tubers on the winter solstice festival of Maghi or Maghe Sankranti to keep the body warm in cold winter days.

Both batuk and Indian vada come from an ancient dish called vataka. The name batuk is borrowed from vataka, an ancient Dravidian word for fermented lentil paste fritters. While the dish is now known in India by its changed name, which is vada, its ancient original name is still preserved in Nepal. Sanskritist Gautam V Vajracharya suggests that some ancient South Asian cultures, including some Vedic and pre-Vedic indigenous customs, managed to survive in Nepal much more meaningfully than other parts of South Asia, which may also hold true for some culinary traditions, including the name of traditional foods.

In his book, A Historical Dictionary of Indian Food (1998), the Indian food historian KT Acharya noted that the dish is fully described even in the Sanskrit scripture Dharma Sutras (800-300 BC) as soaked, coarsely ground and fermented black lentils deep fried in ghee. Vataka was also mentioned in the 12th century Manasollasa, an encyclopaedic Sanskrit work.

With its long history, batuk has now become a cross-cultural food and spread across regions. In far-west Nepal, Khas eat batuk with buttermilk soup known as chhanch, and in Palpa and Gulmi, locals eat batuk with a spicy and sour potato yoghurt salad known as chukauni.

Only ginger, turmeric powder and salt are traditionally added in the lentil paste for flavour. Sometimes my mother would add onion, coriander leaves, and broadleaf mustard greens (rayo ko saag), which add more flavours and texture. I am particularly fond of batuk with rayo ko saag. One can also add other spices such as garlic paste, cumin powder, chilli powder, or black pepper powder.

One doesn’t have to wait for Maghe Sankranti or Maghi to eat batuk! It is easy to make and nutritious. Here is how you can make it at home.

1. Soak black lentils overnight or for at least 5–6 hours. Massage soaked lentils with your hands and wash several times to remove the outer black layer. It is not necessary to remove all the outer layers. Drain the lentils completely.

2. Grind the lentils into a medium-fine paste. In early days, lentils were ground in silauto (flat stone mortar) or okhal (cylindrical-shaped stone or wooden mortar). Slightly grainy paste gives batuk a texture and makes it fluffy.

3. Transfer the paste to a large bowl. Add salt, turmeric powder, ginger paste, and garlic paste (optional) and mix them together.

4. Leave the paste for at least half an hour—or better, overnight—to let ferment naturally. Fermentation gives flavour and makes batuk soft and fluffy.

5. To fry batuk, heat two cups of vegetable oil in a karai or pan, preferably with a thick base, over medium flame. Check the oil by dropping a tiny amount of the paste; if it starts sizzling immediately then the oil is ready for frying. Wet your hand, take a small handful of paste, make a doughnut or ring-shape with a small hole in the middle, and drop in the oil carefully. Wet your hand each time before taking paste. Fry both sides until golden brown; it takes 3–4 minutes each side. Use a skewer or slotted spoon to flip and remove them from oil.

Khanal is a food writer, and is currently working on a book on Nepali recipes, food culture, and history. He writes on Nepali food culture and recipes on his food blog ‘Gundruk’.