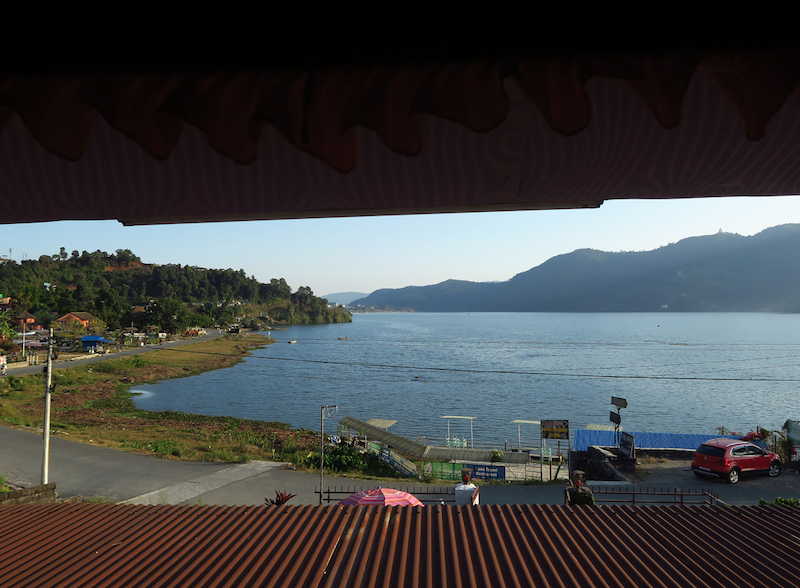 This article was originally published in The Kathmandu Post, 03 March 2020

Think Pokhara and the first two things, among many others, that come to mind is the lake and its fish. All the lakes sitting in the valley, including Fewa, were formed by a mega-debris flow from the collapse of a mountain in the north. Around these lakes, fishing communities have flourished, and fishing is their key source of livelihood. For locals, taking a trip to the lakes to devour fish is a weekend escape; and for visitors, it is an unmissable experience in Pokhara. Among the many fishy eateries spread around the lakefront of the Fewa lake, Duna Tapari Bhojghar is among the best.

Duna Tapari Bhojghar is located about 3km from Lakeside in Khapaudi, Pame—the upstream area has always been a popular destination for fish lovers. The eatery’s traditional-looking red adobe house, with corrugated roof sheets, sits overlooking the serene Fewa lake. Just before the sun dramatically sets, leaving its reflection on the lake, local fishers, mostly women, spread their nets in the waters from their small wooden boats. They are left there to be pulled up the following morning—hopefully full of fish.

As picturesque as the view is from this eatery, equally flavoursome is their food. Not all recipes are necessarily local, but the restaurant puts significant effort into celebrating the catch from the lake with local ingredients. A conscious manifestation of the local culinary tradition is reflected on the spices used. The dishes are humble and unpretentious. A limited native variety of fish—bhitte, fageta, chuche baam and dhunge baam—are deep-fried to a crisp and often served alongside an achaar of tomato and timmur—one of the more popular preparations.

The most popular, and my favourite, is machha poleko—a whole fish or small fillets marinated in mustard oil and spices. The freshly silauto-ground spices are then pan-seared without additional oil. Served with achaar made from grinding just two ingredients: salt and green chillies, the flavour of the fish and achaar couldn’t be more typical and delicious.

The owner of the lakeside restaurant, Raju Nepali, opened the restaurant as a means to preserve local food traditions, hospitality and ways of cooking. Besides a few dishes like soup and curry, food is served on traditional leaf plates, hence the name of the eatery.

“I wanted to show people that fish can be delicious with locally used spices, used sparsely; only then can one can really taste the delicate flavour of the fish,” says Nepali.

Born in Chitlang, a small valley south of Kathmandu, Nepali moved to Pokhara about 24 years ago to step into the hospitality industry by working in a hotel’s kitchen, where his father was the chef. The idea of opening Duna Tapari came to him when he heard guests at the hotel complaining they didn’t get a chance to try local food.

“They wanted to see and experience Pokhara the local way, which is impossible to achieve in a big hotel,” he says. Now it’s been about 16 years since he started and his wife, Muna, and daughter, Ashma, take care of daily operations of the restaurant, including the cooking.

Another must-try dish that may be overlooked is saruwa—fish head soup. With subtle layers of cumin, coriander, onion, ginger, garlic, chillies, tomato and sesame seeds, the soup is gelatinous and hearty, and goes well with the beaten rice it is served with. Instead of using mustard seeds, a common ingredient that is used in fish recipes from Bengal to Southern plains of Nepal, Duna Tapari uses sesame seeds to give the soup a creamy-nutty flavour.

When asked if he has his own fishing nets, Nepali says that only the local fishing community is allowed to put out fishing nets in the lake. He gets his fish from the community’s cooperative. The community, known as Jalari, are a Newar community supposedly from the Pode class. The name Jalari supposedly came from the words jal ahar, literally meaning ‘life sustaining on foods from the water (jal means water and ahar means food). The other assumption is that the word came from ‘jaal ahar’ in which jaal means fishing nets.

But fish is suffering at the hands of introduced species in the lakes. And while this is obviously sad for the fish fans in the area, it speaks to larger issues of declining native fish populations—the result is that he resorts to using bighead carp for some recipes, instead of sahar, rohu and magur.

Although fish is the highlight of the restaurant, the menu also includes a few other Nepali dishes, such as haas ko choila, or duck choila. For the dish, he gets duck meat from the fishing community. Farming duck is a common practice in communities living nearby water bodies and the area is already known for its duck meat curry. The local goat delicacy, which is named ‘khasi ko ledo bedo’ at his restaurant, is prepared by dry-cooking the meat marinated in spices.

This humble place, just a little farther from the hustling Lakeside, may not be well-known and celebrated, but it offers guests a familiar taste.