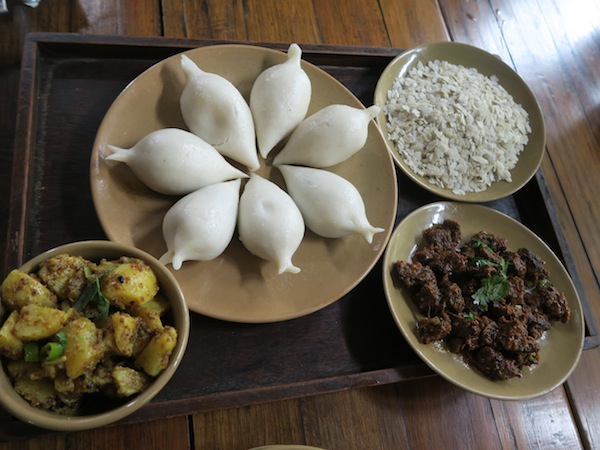 The food culture ofNewar or Newa communities in Kathmandu Valley is probably the richest in Nepal that has been developed for centuries.  Jatraa (festival) and bhoye (feasting) are central to Newari culture.  Newari foods are great and there are plenty of Newari eateries in Kathmandu Valley serving ethnic cuisines. You can also find local drinks Aila (liquor) and Thwon (beer) in those eateries. Patan or Yala, a beautiful historic heritage city on the southern side of Bagmati river, is the heaven for Newari cuisines. Apparently, you can find Newari eateries on every alley or galli of the city of which many of them are largely known to locals only. Here are some of the Newari eateries in Patan, which I personally think serve the best Newari cuisines in the town.

Honacha, located just behind the Krishna Mandir in Patan Durbar Square, is the oldest and most popular hole-in-the-wall for Newari foods, and is equally loved by both locals and visitors. It has limited Newari food items unlike other Newari eateries and very popular for chhoila (spicy barbecue meat salad), piro aalu (spicy potato curry) and wo (lentil cake commonly known as bara).

This Honacha is the other eatery located beside the Bhimsen Mandir just near the Krishna Mandir in Patan Durbar Square. Newari foods they serve are comparable to first Honacha, if not better. They have a cozy space and are usually packed during the weekend. The family members currently operating the restaurant are the 5th-6th generations and has been serving Newari foods continuously.

This local eatery, largely known to the regulars and locals only, is few minutes walk to the north from Krishna Mandir in one of the alleys of Chyasal (near Bhelachhen). It is one of the best hidden Newari eateries in the town. It’s the first Newari restaurant I have seen serving crabs with Newari taste. During winter, you will also find the rare Newari delicacy takhha (a gelatinous dish prepared from buffalo skin-on meat and cartilage) and sanyakhuna (a spicy takhha with smoke-dried fish). ‘Kwaacha’ actually is the commonly called name of the owner. It is currently operated by the 5th generation of the family.

Byanjankar, inhabitants of Chyasal area, are the ones cooking for the royal in ancient time- so, it shouldn’t be surprising they make seriously good foods. They are also seen as custodians of Newari cuisine and food culture. Apart from the varieties of regular Newari cuisines, they also serve delicious curry of uncastrated goat’s meat (boka ko masu).

Newari foods so far have been largely served by the small eateries with very local and authentic taste. The Village Cafe is one of the very few restaurants specialized in Newari cuisines with uplifted ambience and service. It is clean, spacious and designed with local cultural touch. It is run by an NGO, SABAH Nepal, for empowering women home-based workers. If you are eating there, you are eating for a cause. It is also the very few restaurants serving yomari (steam rice cake filled with chaku-sesame seed paste). They have the best yomari in the town. However, the taste is designed to make more palatable for a foreign tongue, and the iconic Newari food chhoila isn’t good enough.

This is one of my favorite places to skip hustling-bustling city and enjoy a weekend savoring spicy delicious Newari cuisines. Harisiddhi Newa Suhlee lies in the outskirt of the core city areas in Harisiddhi (Degukhya-9, Jala), around 4 km from Satodobato Chowk. Suhlee is a not so commonly used Newari term for restaurant/eatery. The eatery was opened in 1982 AD and has continuously served Newari cuisines since then. The most popular dish of the eatery is sukuti sandheko (spiced buff dried meat).